Amy Morin wasn’t setting out to write a bestselling book, but that’s exactly what happened to her after the licensed clinical social worker, college psychology instructor, and psychotherapist hit ‘publish’ on an article. The article was supposed to be more of a therapeutic exercise for herself than anything else. It went viral, and a book was born. Today, Morin is editor-in-chief of Verywell Mind in addition to being the author of the bestselling book 13 Things Mentally Strong People Don't Do and subsequent books on similar topics for women, parents, and kids. Here, Morin shares how to go viral and how to stay mentally strong in the process.

Scribd: Your first book was based on a viral article you wrote with the same title. Did you have any inkling that this article would turn into three books?

Amy Morin: Definitely not. I had written articles for quite a while as my side hustle after my husband passed away. It was just a way I earned a little bit of extra money, because I was a therapist, and you can really only work as a therapist for so many hours a week. I wanted a side hustle that was flexible, and writing became that for me, but for the most part I wrote about therapeutic stuff, like relationships. I really had no plans of ever writing a book and certainly never imagined this one particular article would resonate with so many people!

Scribd: After the article exploded, did you immediately decide to write the book?

AM: I wrote the article as a letter for myself that I didn't even plan on publishing. I decided to put it on a website called Lifehack, and I thought that was the end of the story. But their website went down later that day after I had published it. Apparently, it was because my article was getting so much traffic, tens of thousands of clicks. It got picked up by Forbes, and quickly got 10 million views. As it started spreading around the internet, I was getting calls from media all over the world, calling to talk about it. One of the people that reached out to me was a literary agent in New York, and she suggested that I write a book. At that moment, I was so overwhelmed with the amount of press and the incoming emails I was receiving, I actually didn't even didn't respond to her. I didn't know what a literary agent was; I had no idea. So I ignored her. She followed up with me, though, and we set up a meeting. She told me I needed to turn this article into a book.

Scribd: The article wasn’t about your own story, but you shared a lot of it in the book. Was that difficult?

AM: At that point, I hadn't told anybody the backstory that I had written it for myself in response to what I was struggling with since losing my husband, and I didn't tell her that day, either. But during a follow-up phone call a week later, where she again was prodding me to write a book, I told her. I said the article was really a letter to myself, because I struggled with all of these things. It’s not that I mastered these things. She told me I didn’t have to tell my story, but the book might be even more interesting if I did. So I decided to do that, even though it's uncomfortable. As a therapist, I'm used to hearing people's stories, not sharing my own, so it took some extra courage to agree to that.

Scribd: Choosing to title the article and the books around what not to do was a clear stance. What made you go that direction?

AM: When I wrote the book proposal, I wasn’t sure if people wanted a book about mental strength, or if they literally wanted a list of things not to do. So I struggled with that idea. Ultimately, I decided to keep it true to the article, and that people wanted to know what not to do. There's so many advice books out there about what to do. I want mine to be one that said, 'OK, you're probably already doing a lot of really good habits. Let's talk about how to get rid of the counterproductive ones that might be keeping you stuck.'

Scribd: What was your writing process?

AM: Well, reality hit that I needed to actually write a book — and quickly! — once the contract was signed. I still worked as a therapist a couple days a week, and by then I had a couple of part-time writing jobs. So the way it broke down was I worked Friday, Saturday, and Sunday on the book. I had to get one chapter done each week. So on Friday, I researched the chapter; on Saturday, I wrote it; on Sunday, I edited it. Then I had to move on to the next chapter. So it was 39 writing days that I had to actually write the book. I guess I learned quickly. Luckily, now I’m no longer working as a therapist, so I have more time to work on books, but I do find the more time I have, the harder it gets because then I have time to second-guess myself a lot. I also found it was important to stay connected to what people were struggling with: The world is changing, and peoples' struggles are changing. So I actually started doing a little bit of coaching on the side to understand what stressful things people were dealing with. That one-on-one contact with people is so important.

Scribd: You also do a lot online, despite being in the middle of writing more books. What makes you want to keep putting out content? Do you think that helps you as an author?

AM: I think it does. I most recently became the editor-in-chief of Verywell Mind, which is the biggest mental health website in the world. As part of my work with them, I get to host their podcast. So I feel like now I get to relate to my readers a little bit differently by being a podcast host. I can put content out there that's similar to the stuff in my books, but in a slightly different way. I can test my ideas on social media or in articles, which helps me figure out what resonates with people, and that definitely helps with content with writing more books.

Scribd: Out of all of the habits you write about, which do you personally put into practice?

AM: Definitely "don't give away your power.” It's tempting to just say, “So and so ruined my day, or somebody makes me mad." Just changing your language, reminding yourself that you’re choosing to feel mad can make a huge difference. Feeling like you have a choice in your reaction makes such a big difference in my own life. For women, within that habit, it’s about owning our successes, and knowing that it's OK to be successful. I think for women, part of the power issue is simply knowing that you can be a powerful woman and that's OK. And you can own that.

Scribd: The habit that really resonated with me was the idea of not sinking into comparison. How do you get around the feelings of comparison, especially as an author?

AM: The main thing has been to be aware of social media: It's easy to look at whose book is selling better and then try to figure out if that person is worthy, if their book is actually better, or if they're just more popular on social media. … So I keep an eye on my social media intake, and if I find myself comparing myself to others, I try to come back to my own definition of success. I try to do things in life that allow me to just focus on my own path. So for example, I like to run every day and I try to beat my own times for the mile. I have no desire to race against anybody else. I couldn’t care less how fast somebody else runs. I'm just racing against myself. That just helps me, as a reminder that I'm not in competition with anybody but myself.

Scribd: Do you find that running helps you with your writing process?

AM: Absolutely! It helps me with everything, even coming up with examples of mental strength. As I'm running, my mind will tell me to just quit, don't do this. I can talk back to my brain, and push against that. It helps with everything from my physical to mental health. 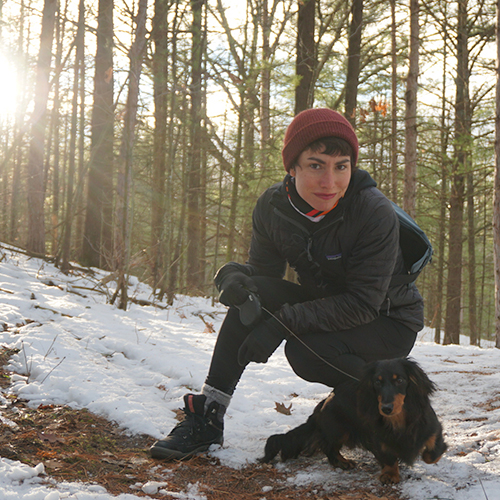 Molly is a writer and bookworm in love with all things wellness related. When not playing outside, she’s writing or podcasting about being outside and healthy habits for The Consummate Athlete. She also writes books, including the Shred Girls series. In her spare time, she runs, rides bikes, and hikes with her mini-dachshund and husband.
Author Conversations
Beyond the Cover
Not yet a Scribd member?
Start Your Free Trial

The Pulitzer Amsterdam Hotel is a luxury ode to writers