On the occasion of the publication of her Scribd Original short story Two Scorched Men, the legendary Margaret Atwood, the sine qua non of just about everything — speculative fiction, poetry, power feminism, Twitter — talks with Scribd about writing stories based on her own life; characters she’s known and is yet haunted by; human time travel and the truth/untruth ratio these days; and being described (gulp) as “the mother of us all.”

SCRIBD: Your Scribd Original story Two Scorched Men is about two wonderfully eccentric men you met while you lived in Provence. They’ve both survived World War II, and their friendship is founded in part on that. There’s real tenderness, though I’m sure neither man, but especially John, the more outrageous of the two, would like it described that way. How would you describe it?
MARGARET ATWOOD: First, these were real people. Both were great readers. Each is grounded in his own literary tradition. John is Irish, and the Irish have a long tradition of denunciation using extravagant and inventive language. See Joyce, Beckett, and Flann O’Brien, just for starters. Swearing is a known tension reliever (though not for those being sworn at). Men in the armies of the midcentury swore a lot! It’s a way of hiding your softer emotions. François turns to wit, irony, and absurdism. But both are also of the generation that felt there were some things you didn’t have to say. Today’s voicing of cozy emotions would seem to them mawkish. But we can’t expect people from the past to exist by our standards, any more than we exist by theirs.

And what do you think John and François would make of these times we’re living in now? John, with his political incorrectness and rages, would definitely risk being canceled by someone or something, and probably relish it? If he tweeted (which I well understand is a long shot), I have to imagine it would be with the hope of getting kicked off? Or of a good online scuffle?
Oh, that would be John all right. He did the same thing in letters. Fight-picking. Nowadays he’d start with letters to the Times, but if he discovered Twitter he’d have let fly, for sure. Twitter would rue the day!

This story, like quite a few you’re writing now, is semi-autobiographical. Is the couple in these stories based in part on you and your partner Graeme? And was Provence one of your favorite destinations?
Yes, the story is definitely semi-autobiographical; more than semi, in that everything in it actually happened, including the all-cheese lunch and the farm animals on parade. The novelette by François is real as well. It’s in this room right now. Graeme and I lived in that part of Provence on several occasions, though not always in that exact location. Sometimes we were closer to Saint-Rémy-de-Provence.

I wrote a lot of my novel Alias Grace in the house described. The desk I sat at to write was very beautiful, but hugely uncomfortable. Just thinking about it gives me a backache.

Maybe that’s what I should say when people ask me if I suffer for my art.

The executive producer of the Hulu series based on your dystopian classic The Handmaid’s Tale called you “the mother of us all” when the show won an Emmy in 2018. That’s why I just have to ask you about the father of tragedy, Aeschylus, and what he says about memory and life’s challenges. Would these Aeschylus quotes apply at all to the process of writing this set of stories? About what’s evoked when looking back on your life? The effects of memory?

How would you describe the process? Anything like time travel?
The process of writing about the past? All writing is time travel to a certain extent, since the writer and the reader are never in the same time and place. And you can’t write about the past without the benefit (or detriment) of your own knowledge of what happened next. The wonderful Italian microhistorian Carlo Ginzburg has said that all storytelling is in fact a form of shamanistic journey — going from the here and now to the there and then, returning to speak in the here and now of what you have experienced in the there and then.

Perhaps that’s what is definitively human about us. Dogs have memories, but as far as we know they don’t exchange narratives that begin “Once upon a time.” Is time travel a function of our human grammars? Most likely.

In the story, you discuss some thirteenth-century South of France–based heretics and how they were massacred for their beliefs. Given that you’re a deep reader of history and a stalwart supporter of free thinkers, I wonder if certain heretics have captured your interest more than others — either for their heroism or because you understand that history is often a collision between convention and the rebellion against it. Who stands out to you? Hard not to love Galileo, for instance? Joan of Arc?
Joan was not a heretic. She was a mystic, and a victim of political spite and malice. But yes, I have a certain sympathy. My ancestral lines are mostly from people (including New England Puritans and French Huguenots of the eighteenth century) who ended up where they were because they had to escape from their places of origin. Alas, heresies turn to orthodoxies, and orthodoxies become oppressive after they acquire enough power to try to eliminate dissent and competition.

As for my favorite heretic, hard to say. Should the condemned victims of orthodoxies be judged by their death speeches? Their bravery? Do accused witches count? I have a soft spot for Rebecca Nurse (integrity) and Giles Corey (bloody-minded courage).

Is there anything you feel a little heretical about yourself or just rebellious toward these days? The wealth of bad news? The noise of these days? The speed of everything? Do you ever wish at times we were a little less connected?
Oh, I wouldn’t say I’m deliberately heretical about anything. One simply has to keep asking — about everything, increasingly, it seems — Is it true? And is it fair? We’ve always been lied to a certain amount, and especially during times of crisis, but the truth/untruth ratio does seem to have got out of balance. Do I feel it’s my job to correct that? I lack the power, needless to say. But we can at least try to bear witness to truthfulness, in our limited ways.

Anything in particular you’d like to add about what you think John’s and François’s lives can teach us? Maybe that human life has always been hard, will always be? That we, of this time, shouldn’t think ourselves more tested than previous generations? That no one gets out of life without some scars?
It isn’t the writer who decides what a work of fiction “means.” It’s the reader. Over to you, Dear Reader.

One last thing: How did you feel about being called “the mother of us all”?
It was very kind, but it's Eve who’s usually called the mother of all, and she has a bad rep. But if it’s science fiction that’s under discussion, Mary Shelley is the most likely female progenitor. 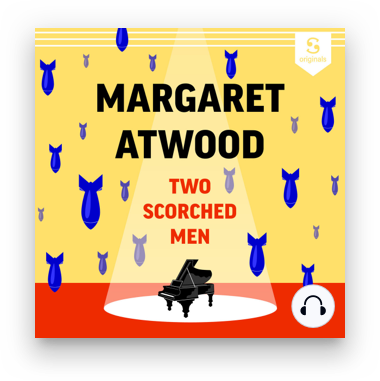 Literary icon Margaret Atwood (The Handmaid’s Tale) celebrates the restorative power of friendship in this semi-autobiographical story of two old buddies in Provence, France. The bond between John, a fiery Irishman prone to rants and “Mad Men”-esque boasts, and François, a warm, pun-loving Frenchman with a tragic past, is a timely reminder of how human connections get us through rough times.

Two Scorched Men is a Scribd Original and is available exclusively on Scribd. It’s included in our subscription service as an ebook and an audiobook. You can find more Scribd Originals here.

Author Conversations
Beyond the Cover
Expert Tips
Open Book - Scribd Originals
Not yet a Scribd member?
Start Your Free Trial

8 hobbies that start with a good book