At Scribd, we’re always trying to learn more — that’s why we started the Feed Your Mind Challenge. Each month, we provide a handful of prompts designed to motivate you to read more, explore new content types, and help you find works that are outside of your usual go-to genres. April’s prompts were: 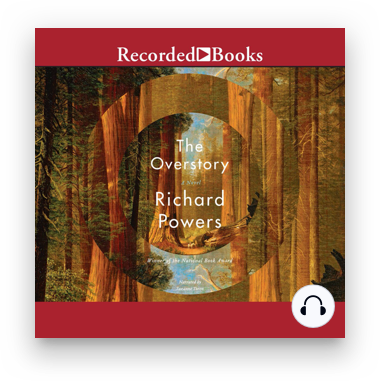 The Overstory by Richard Powers

At the beginning of April, I had a large, sick oak removed from my front yard. Back in December, when I realized the oak was too sick and could never be returned to health even with yearly treatments, I cried. I felt horrible having to cut down something so majestic, even though I wasn’t the one who had let it fall into poor health in the first place (I’d only moved into my house in October 2020). I want to replace it with another tree, but it won’t be as grand as the old oak, so I’m still left with a sense of loss.

After committing this tree murder, I finally started listening to the Pulitzer Prize-winning novel, The Overstory, all about how trees are complex creatures, an interconnected ecosystem, worthy of being protected from deforestation and other human horrors. I’d been letting this book haunt my TBR pile since its initial publication three years ago, afraid of its length, its literariness, its heft — but for this particular April, it was the perfect soundtrack to my constant weeding (among the horrors in my backyard: Japanese knotweed, flowerbeds completely covered in ivy, so many dandelions). It starts with the stories of several different, disconnected characters who have various levels of appreciation for trees who then are brought together through a need to protect trees, and thereby humanity itself: “She sees it in one great glimpse of flashing gold: trees and humans, at war over the land and water and atmosphere. And she can hear, louder than the quaking leaves, which side will lose by winning.”

Describing Richard Powers’ epic just emphasizes how strange it is that a story where trees are the real heroes became such a beloved tome. (It also just has some legit strangeness in it: There’s a character who dies for a little over a minute, and then comes back to life and can hear the trees talking to her.) Most of the book is an elaborate description of protest against loggers, but it never feels preachy. Powers’ beautiful writing captivates; more than that, it inspires. It makes me appreciate trees all the more. It reminds me that redoing things in my house has a price. It makes me want to do more to combat climate change. A loss for the trees is a loss for us all.

CHALLENGE ACCEPTED: DO SOME SPRING CLEANING 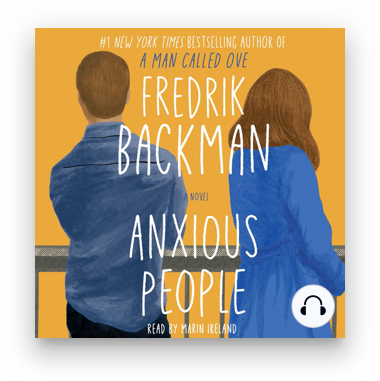 I was so excited when I saw this challenge because I have spoken with many of our subscribers who tell me how they use audiobooks to help them get through chores. I wanted to experience the “let me just get through one more chapter” motivation that gets someone to iron, fold, and color-code their socks! Moreover, when I opened the suggested reading list and saw Anxious People by Fredrik Backman, I knew I was in for sure. I have yet to read anything from Backman, despite these books being some of the most popular on Scribd.

“People need stories.” This line from the book perfectly encapsulates the lasting impression I will carry with me for years to come. The book is a sweet, cute story of many of the various everyday anxieties we deal with. Throughout the story, the narrator doesn’t try to solve or explain these disruptions. They just acknowledge them and, through that, offer smiles, laughs, and relief. Basically, this book is a fun-to-read Personal Growth library shelf in a single novel. Marin Ireland’s narration is perfect. I am so excited I can search Scribd by audiobook narrator because I will check out more of her work soon. Also, the 76 chapters of varying lengths (some as short as one minute) made it a spring cleaning boon. I could time my next task according to the length of the chapter. Needless to say, my sock drawer is currently quite impressive! 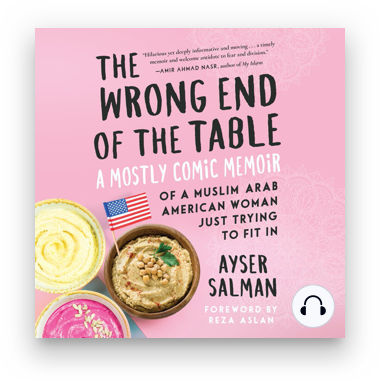 The Wrong End of the Table by Ayser Salman

I listened to the audiobook version of The Wrong End of the Table, narrated by author Ayser Salman, and the book feels like a homey conversation between two awkward people (where one of the awkward people is me; while I don’t have nearly the same ‘not fitting in’ baggage as Salman, I have my own distinctions). Salman’s book, despite being so unique to her, feels entirely relatable. Who hasn’t felt excluded from the cool kids’ table? (Except, presumably, the cool kids). Salman moves from her early grammar school years to post-graduate life, talking about the challenges a Muslim Arab American woman faces in America. It covers crushes, dating, parents, and the constant struggle to find oneself. It moves from fellow classmates mangling her name, so much that she goes by “Lisa” for a few years, on to 9/11 and the Trump years. My favorite parts are where she relates conversations with her and her parents, complete with her parents’ accents.

You might think the latter half of the book covering increased Islamophobia in America would be heavier than the first part, but Salman’s humor keeps the tone light, even if the topics aren’t. I appreciated that, because she doesn’t deny the weight of what she’s talking about, but she doesn’t allow it to overwhelm her. 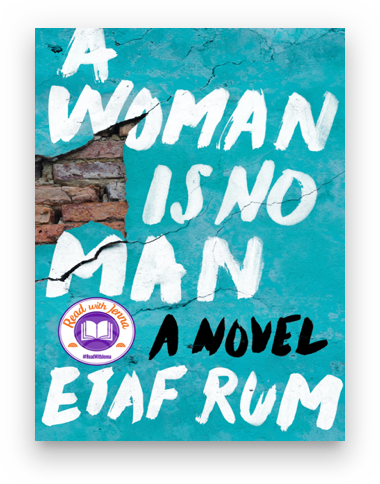 A Woman is No Man by Etaf Rum

Etaf Rum's debut novel will stick with me for a very long time. It is a story of mothers and daughters, of three generations of the Ra’ad family navigating a conservative culture where even in 2008, a woman is most definitely less than a man. This book weaves together tragedy and triumph, describing not only the impact of generations of family violence but also how the Ra’ad women find their voices and try to manifest a different future. And while the family at the center of the book is Muslim, many of themes are universal. Each generation of women inherits the bonds of oppression from that generation that goes before us. If we are lucky, the bonds have been loosened — even just a bit — and we can continue working on the knots until we are all free. 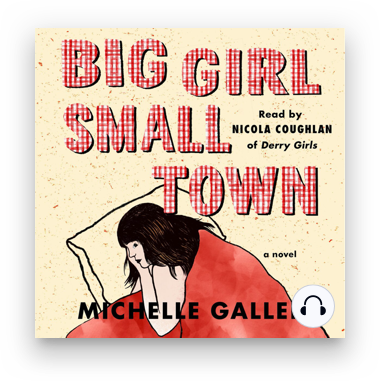 “I guess I identify with ‘oddball’ narrators because I’m not neurotypical,” author Michelle Gallen told The Irish Times. And Majella, the narrator she created for her debut novel, Big Girl, Small Town, certainly qualifies as odd, at least according to her neighbors, who don’t know she’s “an undiagnosed autistic woman,” according to Gallen in an interview with Kirkus Reviews.

Seeing the post-Troubles world of a small town in Northern Ireland through the eyes of Majella makes for an absorbing, touching, and often funny read. Majella takes readers through her very structured day-to-day routine, working at the local fish and chips shop, caring for her mother who’s prone to dramatics and overindulging in drink, and taking refuge in (and social cues from) reruns of Dallas. But, in stark contrast to her ordinary daily regimen, being privy to Majella’s point of view also opens readers’ eyes to extraordinary events swirling around her. Catholic versus Protestant tensions still simmer, occasionally boiling over into fights in the street. Her father went missing without a trace years ago, and his unexplained disappearance haunts the family. And her grandmother just died after a brutal beating — possibly perpetrated by someone who lives in their little town. Big Girl, Small Town brilliantly humanizes both autism and the Irish people living on the border between the Free State and the United Kingdom where reverberations from the Troubles still linger. 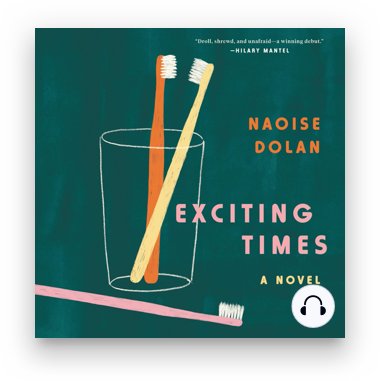 Ava is an Irish expat teaching English to school children in Hong Kong. She identifies herself as a “communist” and is aware of the irony in her entanglement with a rich English banker, Julian. Quick-witted with a deadpan demeanor and painfully sardonic, Ava seems to be too smart for her own good, which renders her relationship with the seemingly emotionless (and kind of douchey) Julian a match made in heaven. With him, she can take the back seat and carry her life like a social experiment. That is until Edith, an affluent, native Hong Konger, comes into play. When their friendship-turned-something-else makes her actually feel her feelings, she finds herself in true internal conflict for the first time.

You’re going to see a ton of reviews comparing Noise Dolan and Sally Rooney and, though I think they differ both in style and themes, they do belong to the same generational beat, with their gifted, alienated protagonists and their dissociative tendencies. The seaming disaffection of this type of protagonist can be infuriating, as they don’t seem to realize that self-awareness doesn’t equal self-knowledge, and is no shortcut toward redemption.

Dolan’s main character does a really good job at masking her vulnerability and it may even trick you, as a reader. But make no mistake, the feelings are there, raw and messy. You just have to go past the cynicism to see the desire for human connection this young woman is resisting. She’s giving the limelight to underlying power dynamics to avoid dealing with the actual interrelational (and emotional) stakes. For all her brainy social commentaries, she’s at a loss when it comes to her own feelings. But here is where, I think, Dolan’s audience splits between lovers and haters. I don’t think Ava is faking it, she’s just truly skilled at the cerebral and not at all at intimacy.

There's a passage in the novel about how holding Julien’s hand feels like holding a museum pass for Ava, while holding Edith’s feels like holding a grenade. Fear of intimacy is a fairly relatable premise, if you see it for what it is. (Shortly after writing Exciting Times, Naoise Dolan was diagnosed with autism.) 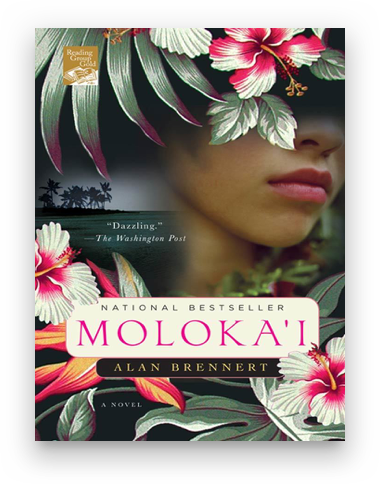 Initially, I selected Moloka’i by Alan Brennert because I was about to take a long-awaited vacation to Hawaii (that was delayed time and again by the pandemic), and I wanted to read something that would transport me to the islands in advance of my trip. In this book, I discovered so many parallels between 19th century Hawaii and today — with pandemics and calls for social justice, as well as the politicization of disease (leprosy and COVID), and finally the miracle of science to help us find a way out.

Moloka’i is a beautiful and heart-wrenching story about community, family, religion, politics, and the resilience to keep going. It follows the life of Rachel Kalama, who is diagnosed with leprosy at age six and separated from her family (and that’s only part of it). Long story short, she is a warrior who ends up living a full and remarkable life, even though the obstacles she encounters along the way are exhausting and seemingly never-ending.

If you want to restore your faith in humanity and believe in the good of humankind — and you like to imagine the idyllic islands of Hawaii while doing it — these 556 pages will fly by.

Look out for next month’s challenge. To participate, tweet us @Scribd or tag us on Instagram @Scribd to show what you’ve been reading or listening to using the hashtag #FeedYourMind.

Reading Challenges
Not yet a Scribd member?
Start Your Free Trial

Struggling to find time to read? Try an audiobook.

What is bibliotherapy, and how can you try it?

20 literary Instagram accounts to fill your feed with books