At Scribd, we’re always trying to learn more — that’s why we started the Feed Your Mind Challenge. Each month, we provide a handful of prompts designed to motivate you to read more, explore new content types, and help you find works that are outside of your usual go-to genres. June’s prompts were: 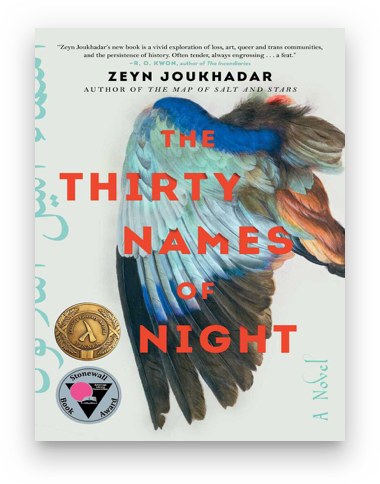 The Thirty Names of Night by Zehn Joukhadar

As soon as I heard about The Thirty Names of Night, I knew I had to read it; after it won the Lambda Literary Award for Transgender Fiction at the beginning of this Pride month, I knew I had to read it right now. The prose surpasses the beauty of its majestic title at every turn as it travels back and forth through time and delves into trans and immigrant experiences. Zeyn Joukhadar’s novel follows a closeted trans boy who’s mourning the loss of his ornithologist mother and trying his best to provide for his grandma. As he looks for a new name, closure, and stability, he’s trying to confirm the existence of a rare bird that his mom and an artist in the past, Laila Z., told of. There’s a lot going on here about intersectional identities and history’s echoes, and it’s all so wonderfully told. Joukhadar is a luminous new literary voice that I’ll be eagerly awaiting new books from going forward. 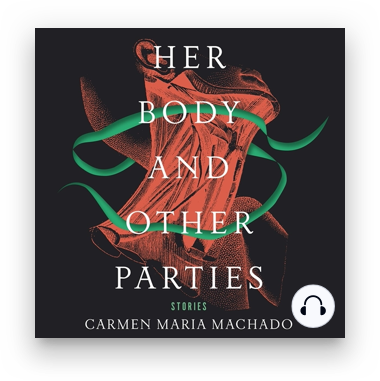 Her Body and Other Parties by Carmen Maria Machado

My pick for this month’s challenge is by no means a hidden gem. A finalist for the National Book Award and Lambda Literary Award-winner with a TV adaptation on the way, Carmen Maria Machado’s debut short story collection has garnered, since its release in 2017, the rare, sought-after combination of being both critically acclaimed and commercially successful.

Her Body and Other Parties is the perfect fiction audiobook, if there is such a thing. Like many, I like my fiction on the page, even more so in a foreign language, like English is to me. But alas, audiobooks are more convenient for busy people. I listened to the collection one story a day during lunch walks. And I’ll tell you, it felt like a walking meditation, or more like fully conscious dreaming. Think about The New York Times review headline: “Fairy Tales About the Fears Within.” All the weirdness, bent archetypes, politics and, yes, sex that dreams are made of are there. Who would have thought horror fiction could make me come back to work levitating? My explanation is that listening to these stories somehow felt like a catharsis from all the violence, gender constructions, and crazy beauty standards women and LGBTQ+ communities have to put up with on a daily basis. Call it a trauma-processing experience. Sensual, ambitious, horrifying at times, this is a book about the body and everything that it goes through, the fun and the unjust. 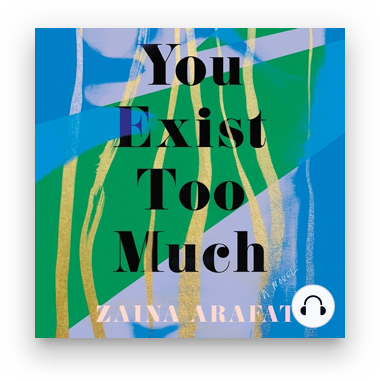 You Exist Too Much by Zaina Arafat

For this month’s challenge, I’ll admit I chose the book based on only two factors. First, I was immediately drawn in by the protagonist being a Palestinian American woman (I am woefully undereducated on the struggles in Palestine and the voices within the community). Secondly, the title ensnared me. “You exist too much” is a callout of the main character’s mother, who struggles with her child’s identity, behaviors, and choices. I think many lively children can identify with this insult/compliment from parents.

The book has a non-linear structure, but it’s not jarring at all. The writing seamlessly dips around timelines, places, and stories from chapter to chapter, yet the themes of appetites and satiating them revolve around every aspect of the vignettes we get. Fans of the TV show Feel Good will enjoy the similar themes of love, addiction, relationships, and fluidity shared between that program and this novel.

Also, shout out to Zaina Arafat for dropping a Mrs. Roper reference — I did not expect my silly childhood TV to make an appearance in such a thoughtful and hip book! I loved this debut book and look forward to reading whatever Arafat puts out next. 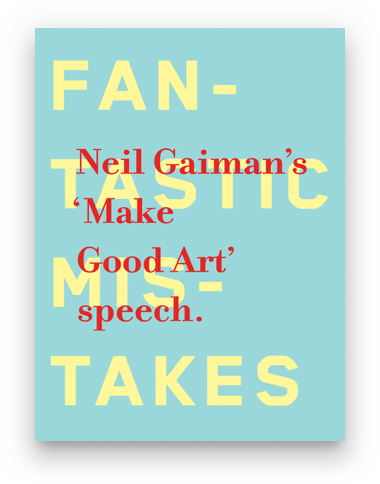 “Make good art.” Make it on your good days. And make it on your bad days, too. That’s Neil Gaiman’s message in his commencement address to the Philadelphia University of the Arts graduating class of 2012. Lucky for the rest of us, Gaiman and graphic artist Chip Kidd turned that speech into this short ebook so we can all benefit from the American Gods and Sandman author’s wisdom on how to make it in the arts.

I don’t want to spoil anything or deprive you of the magic of Gaiman’s way of putting things — get it straight from the source in this ebook — but as a teaser, just know that he shares the following:

A quick, inspiring read for folks at any stage of their career, whether you’re just starting out or have been at it for years. 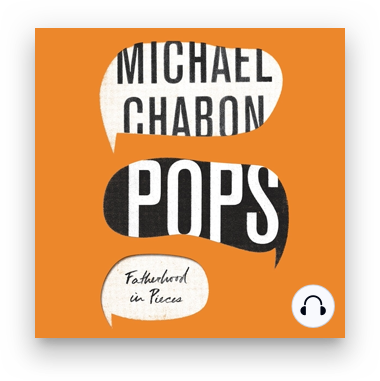 Father’s Day often receives short shrift compared to Mother’s Day, a callous display of how much gender still matters in our everyday lives. And while Michael Chabon’s collection of essays, for the most part, could be called “Parenthood” instead of “Pops,” the best piece is one that confronts gendered differences directly, called “Against Dickitude.” It’s about Chabon trying to resist his male, dickish tendencies, and trying to teach his children — especially, of course, his sons — not to be assholes to women. By the end of the piece, I had chills: “Horror is the only fit response when you are confronted by the full extent of your power to break another human being,” Chabon writes, after callously not complimenting his daughter’s new, experimental haircut and seeing the disappointment upon her face. I can safely say that the end of this essay will stay with me forever.

Chabon tackles a myriad of topics and tells many a funny story in this short compilation. He seems like a great dad, and his reminiscences had me thinking of my own father and all the ways in which he’s so stereotypically masculine, but never tried to box me in based on gendered stereotypes. Pops is well worth a listen for any dads or children out there who love their family and great writing.

On Juneteenth by Annette Gordon-Reed

This month I challenged myself by reading On Juneteenth by Pulitzer Prize-winning author Annette Gordon-Reed, and I’m so glad I did. On Juneteenth weaves history (Gordon-Reed won her Pulitzer in the History category for The Hemingses of Monticello, so she’s no history slouch) with personal reminiscences. Gordon-Reed was the only Black student in her Texas school for a few years prior to Brown v. Board of Education landmark ruling (there’s a long explanation for how this happened that provides background for the rest of the book). She talks about what Juneteenth means for Black families in general, and her family in specific, unspooling the history so it feels like organic learning, not lecturing. She shares her feelings about her home state of Texas, its racially oppressive history, and how she views the men Texas treats as heroes. Before I read the book, I had a one-sentence depth of knowledge about Juneteenth and even less than that about Texas’s history — the bias of being a white person raised in the Northeast — but On Juneteenth made me feel, as much as I could, what the Juneteenth celebration means to Black Americans. 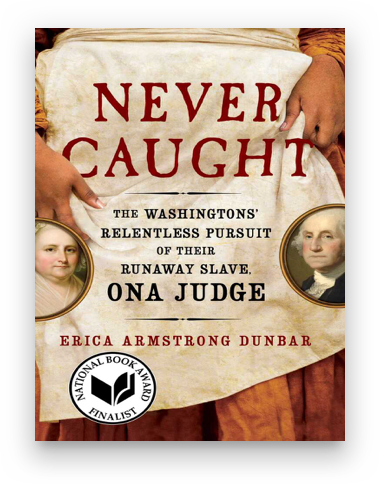 For this month’s challenge, I selected Never Caught by Erica Armstrong Dunbar, from Scribd’s Juneteenth reading list. Like many Americans, I am trying to learn as much as I can about portions of American history that white people have collectively ignored over the last 400 years. The work of Erica Armstrong Dunbar is a good place to start (see also: She Came to Slay). Dunbar is a great guide; she writes about history in an accessible and approachable way, but without glossing over the truth of our past.

George Washington not only enslaved men and women, but also went to extraordinary lengths to ensure their continued bondage in service to his family. The first President of the United States kept detailed records of his human property and it is partially through these records that we get a glimpse of the people held captive by the Washingtons. This book specifically details the life of a young woman, Ona Judge, who served the Washingtons in their homes in New York, Philadelphia, and Virginia, throughout George's time in office.

Based in part on Ona's own interviews, Dunbar paints a clear picture of the era, including early efforts towards abolition and the many injustices of slavery. The reader gets to know Ona but also other enslaved men and women held by the president (if you're watching or reading High on the Hog, you may recognize Washington's enslaved chef, Hercules). Despite being highly skilled in her work and an invaluable resource to the first lady, Ona faced a grim future limited to enslavement by Martha Washington and her descendants. Instead, Ona ran. And despite the Washingtons’ attempts to force Ona back into slavery, she remained free the rest of her life. I highly recommend her story. 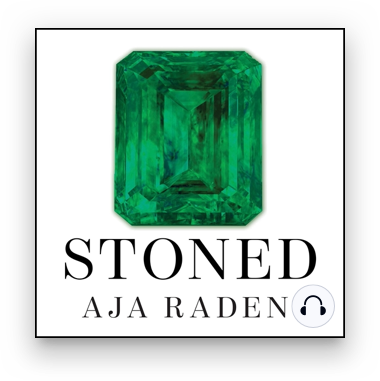 “Diamonds are a girl’s best friend,” so I decided to learn a little more about them with Stoned. This book gives fascinating insights as to why we give value to tangible diamonds and the history and psychology behind why the diamond symbolizes the ultimate sign of wealth.

I loved hearing about how the diamond industry was basically created by one greedy man and two brilliant female ad executives. Before their campaigns, diamonds were not considered a "must-have," but with their incorporation into movies and the coined term “diamonds are a girl’s best friend,” a diamond became the had-to-have item we know it as today.

Stoned gives a thorough and engrossing background of diamonds, desire, and consumer culture that spans across history. If you love jewels or want to understand the root of desire, this book is the one you should crave. 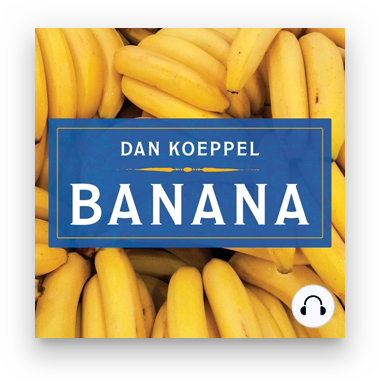 Given how ubiquitous the banana is, it was shocking to learn this fiber-packed star of the banana split is on the brink of extinction. Dan Koeppel’s meticulously researched book on the common tropical fruit that’s easily found in every corner market bursts with facts and trivia that made me realize how misunderstood bananas are. For example, did you know the banana plant is a large herb (not a tree)? Or that it was likely the fruit in Adam and Eve’s story (not the apple)? Or that the Cavendish is the only banana left (and that it comes from cloned plants)? Or that bananas don’t have seeds and therefore don’t breed, which means they’re 100% reliant on human intervention?

Yes, Koeppel makes it clear that the banana is pretty misunderstood and has been taken for granted. So it may be alarming to learn that its future is hanging on by a thread because the next disease or fungus could wipe it out completely. Koeppel, being the expert reporter he is, provides more information than you’d ever expect to remember about the banana — and then he dissects the politics and science around it.

It’s good to have the facts so we can be responsible global citizens and make educated food choices. For me, my drive to eat local and seasonal means I only eat bananas on occasion, and it’ll probably stay that way. After all, I love a good banana split.

Look out for next month’s challenge. To participate, tweet us @Scribd or tag us on Instagram @Scribd to show what you’ve been reading or listening to using the hashtag #FeedYourMind.

Reading Challenges
Not yet a Scribd member?
Start Your Free Trial