At Scribd, we’re always trying to learn more — that’s why we started the Feed Your Mind Challenge. Each month, we provide a handful of prompts designed to motivate you to read more, explore new content types, and help you find works that are outside of your usual go-to genres. May’s prompts were: 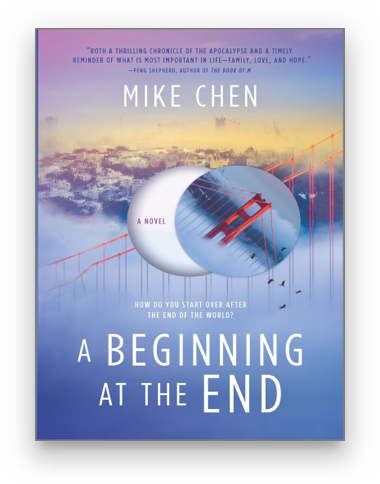 A Beginning at the End by Mike Chen

Every time a Mike Chen book has come out over the past few years, I’ve thought, “wow, I really need to read that!” A book about super(anti)heroes with memory loss. Another about time travel and familial love. And last but not least, a post-apocalyptic story about a horrible flu pandemic that kills a significant portion of the population. Every premise spoke to me, but I would just add each to my never-ending to-be-read list. But for Asian/Pacific American Heritage Month, I was determined to finally get on the Chen hype train.

Of course, I picked the one that’s perhaps a bit too close to home for some at this moment: A Beginning at the End, about a deadly global flu outbreak. I suppose I’m a bit of a masochist, always going for the dystopias or apocalyptic stories no matter the circumstances, yet the book was an oddly uplifting read about four very different people coming together to find happiness after 70% of the population died of the flu. Chillingly, Chen’s novel came out only two months after the first known case of COVID-19, and two months before the US issued widespread stay-at-home orders; the timing was coincidental, since he’d been working on the story for years.

Now that we’re finally starting to poke our heads outside again and can hug our loved ones, it’s actually a great time to read A Beginning at the End. We’re in the same stage as the characters: The “return to normal” after everything fell apart. “Like in the book, we’re going to come out of [the COVID-19 pandemic] with pretty massive emotional scars, and I think if there’s one lesson I absorbed writing it — and one lesson I’d like readers to take away — it’s that some people are going to need more time and space to process this, and we should be kind and understanding for those people,” Chen said in a Forbes interview from March 2020. If you liked Station Eleven, and you’re feeling even mildly optimistic about our outlook these days, give Chen’s book a read. 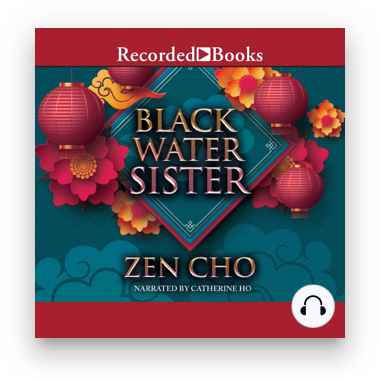 Even as more vaccines get in arms and optimism fills the air, I’m still finding myself seeking refuge from the past year in escapist literature, like pretty much anything in the fantasy genre. All the better if the story features a regular old, totally ordinary person who suddenly finds themself able to draw on a supernatural power that gives them the strength to fight back against anyone threatening harm against them or the people they love. Who doesn’t want to kick injustice’s a**? Especially in light of the recent surge in violent attacks against Asian Americans. Like the real-life Asian grandmother who fought back against her attacker, the feisty Malaysian grandma Ah Ma in Zen Cho’s Black Water Sister is an inspiration. Unlike real-life though, the novel’s Ah Ma is a ghost. And she’s not fighting racists, she’s taking on gangsters — and using her granddaughter’s body to do it.

As soon as I saw Cho describe Black Water Sister as “A stressed zillennial lesbian fights gods, ghosts, gangsters & grandmas in 21st century Penang,” I had to pick it up. And it did not disappoint. Ah Ma is unapologetically who she is, and she’s not your stereotypical nurturing maternal type. Her ferocity contrasts with her granddaughter, who hides her girlfriend from her parents out of the desire to be a “good daughter.” But Ah Ma sees more than the good obedient child in Jessamyn — “You’re so troublesome; it shows your spirit is strong,” Ah Ma says — and it’s Jessamyn’s troublesome spirit more than the paranormal strength she draws on from Ah Ma that is her true superpower. 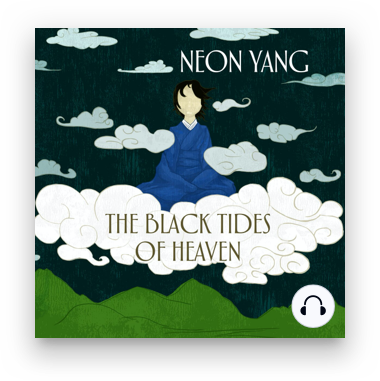 The Black Tides of Heaven by Neon Yang

This month’s challenge led me to finally pick up Neon Yang’s The Black Tides of Heaven, which I’ve had on my TBR list for at least a year. The novella unrolls like a beautiful silk thread, starting from when the protagonist was a baby until he is in his 30s. The world-building is subtle — there are supernatural abilities located in “The Slack,” but the magic doesn’t dominate the plot. Instead, it’s the protagonist’s journey to figure out who he is that is the focus. In this world, people choose their genders in their teens — or never choose at all — and Akeha makes his decision, balking his family’s tradition of being female to become male, while his twin Mokoya chooses to be female (Mokoya’s story is told in the twin to this novella, The Red Threads of Fortune). The twins’ mother is the ruthless leader of the country (“The Protectorate”) and uses Mokoya’s ability to prophesy to keep her iron hold. But the twins, particularly Akeha, chafes against his mother’s rule, and so he runs off, joining the group trying to bring down the government. There’s a subtle, lovely romance, gorgeous language underpinning the plot, and a satisfying resolution. 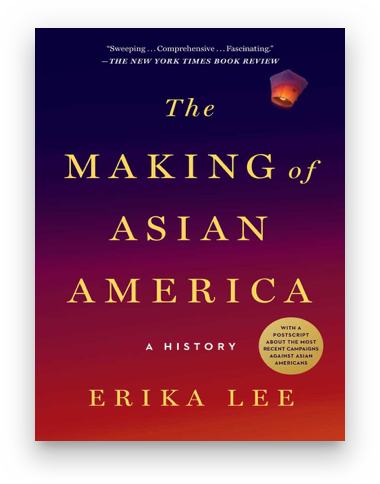 The Making of Asian America by Erika Lee

When you finish Erika Lee’s The Making of Asian America, you feel like you should be able to print yourself a college course credit certificate for a survey history class. (Maybe Scribd should offer that?) I felt so proud of my new understanding of this history.

I’ll be honest, when I first decided to take this challenge, I thought, “I’m not going to finish this in a month. I have too much compelling fiction to keep me busy, and this book is long.” Well, first of all, it looks longer than it actually is because of all the notes. The Making of Asian America is a well-researched book that gives you exceeding confidence that the historian has done her homework for you. Secondly, I ended up wishing it were even longer! This history is incredibly well-paced, with a thoughtful flow of historical records, stats, and stories of individuals. Somehow it manages to give attention to specific communities while also addressing the thread of the entire Asian American experience.

I will also make a final recommendation. Whether you listen to the audiobook or read the ebook (I switched between the two myself), turn to the ebook for a recently added Postscript Asian Americans’ Racial Reckoning, which starts with a timely reaction to the March 2021 shootings in Atlanta and the recent spike in violence against Asian Americans. One of the most important ways we can counter these recent cultural malfunctions is to educate ourselves about the history. Please read this book. 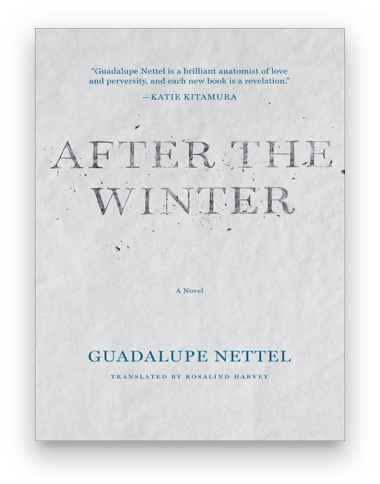 After the Winter by Guadalupe Nettel

I got so excited when I saw this month's challenge included a prompt for Mexican authors! I haven’t invested nearly as much time as I’d like in them (there are so many authors and nationalities to cover in Latin American literature!). I went with one the critics rave about, Guadalupe Nettel. It’s safe to say that the Mexico City native, author of four novels to date, has cemented her place in contemporary narrative. After the Winter, her 2014 novel, was awarded the prestigious Premio Herralde de Novela — which kind of determines who is going to be someone in the literary world in upcoming years.

The story is divided between two narrators: Cecilia, a postgraduate student from Oaxaca living in Paris, and Claudio, who moved in his youth from La Habana to New York alone. Two alienated souls in romanticized cities. We spend some time (about 100 pages) with them separately before their worlds collide, when Claudio visits Paris with his girlfriend (yes, he’s kind of a jerk) and meets Cecilia through mutual Cuban friends.

As Nettel deconstructs their relationship, she makes you think about the assumptions we make about others, particularly significant others, and how we set ourselves up for disappointment under that premise. That’s the skeleton, but be prepared for mature prose, freaky events and characters, and sullen undertones. 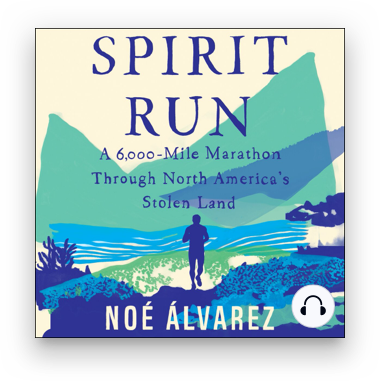 Many (many, many) years ago, when I first moved to San Francisco from the East Coast, I ran in a three-day relay race from Calistoga to Santa Cruz. We alternated running and sitting in a van cheering our fellow runners as we traveled south to Santa Cruz. I ran three times, covering about 8–10 miles each time, once running through Fairfax, California, at 1 o’clock in the morning. It was one of the most grueling, awe-inspiring, and unforgettable experiences I’ve ever had. These types of physical and mental challenges covering distances meant for engines and tires — not human hearts and feet — are visceral. So when I learned about Spirit Run, I knew it was a must-read.

This memoir started out strong, depicting Álvarez’s youth as the son of Mexican immigrants, who worked alongside his mother in an apple-picking plant in Yakima, Washington. He did well enough in school to earn a scholarship to college, but struggled to fit in. That’s when he learned about Peace and Dignity Journeys (PDJ), which are spiritual runs to help preserve indigenous cultures and unite nations across the Americas. They run from Canada to Guatemala in a similar relay-type fashion, but through very rough terrain (not paved California roads). Álvarez wrestles with the decision to drop out of college to run — and connect — with his heritage and find belonging. Ultimately, he joins the run. The actual run portion of the story was not nearly as rich as his depiction of his family life and growing up; nonetheless, it’s still worth a listen.

I’d recommend queuing it up, lacing your shoes, and playing the audiobook over a few afternoon walks — or runs. 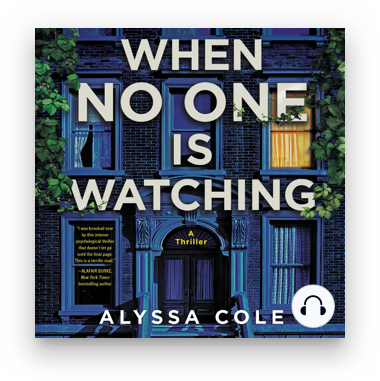 When No One is Watching by Alyssa Cole

I accepted the challenge of reading an Edgar Award-winning mystery and chose When No One is Watching by Alyssa Cole. I was expecting a page-turning thriller, and what I got really doesn’t have a genre; the closest explanation may be a mashup between societal commentary and horror.

The book follows protagonist Sydney Green as she uncovers the truth behind the rapid gentrification of her Brooklyn neighborhood. Spoiler: it goes beyond the diaspora of hipsters from the Lower East Side of Manhattan. The truth includes a mix of corporate greed, racism, and torture.

As a former New Yorker and current San Francisco resident, the descriptions and impact of gentrification hit close to home and made me examine my own contributions and attitudes about the subject. As a romance enthusiast, I was pleased to have a small romance subplot to root for. Overall, this was a heavier read than I was expecting, but I’m pleased with the end, and recommend it to others.

Start Listening
Look out for next month’s challenge. To participate, tweet us @Scribd or tag us on Instagram @Scribd to show what you’ve been reading or listening to using the hashtag #FeedYourMind.
Reading Challenges
Not yet a Scribd member?
Start Your Free Trial